← back to
Infrequent Seams
Get fresh music recommendations delivered to your inbox every Friday.
We've updated our Terms of Use. You can review the changes here.

You Scream A Rapid Language 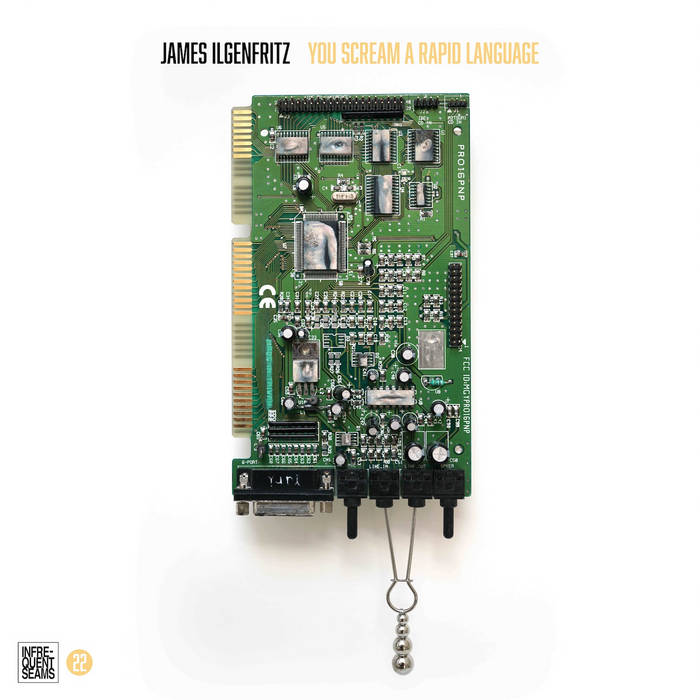 The Roman poet Ovid described how dripping water hollows out stone, not through force but through persistence. Terminal Affirmative (2014) is a dialog between conceptuality and musicality, as the expansive melodic potential of the violin stands in stark contrast to the tightly focused expressive range of the double-pedal bass drum. Both parts are extremely virtuosic, but while the violinist's hands and fingers are very active, the hands of the percussionist are kept motionless, with all the force and persistence transferred to the percussionist's two feet. This redirected energy draws into sharp focus the persistence of repeating an action so many times that a permanent impression is driven into stone.

The term Apophenia describes humans’ tendency to perceive patterns within randomness. The Apophenia series is a set of compositions that explores the potential for a group of performers to create a coherent narrative from a set of distinct fragments of information. These fragments should be ordered differently in each performance, necessitating different solutions to the problem of creating this continuous narrative. In the case of Apophenia 3, the fragments of information consist of ten pages, each with its own approach to combining different notation strategies, in effect mixing composed material with improvised or indeterminate material. Some are very carefully scripted; others are open to interpretation. The sub heading of this work is ‘The Index’, which refers to an experimental short story by the British author J. G. Ballard. This story is told exclusively through the format of an index to a nonexistent autobiography of a fictional character who nonetheless interacted with many key figures of the mid 20th Century. So while it is not possible to know what exactly this fictional character’s relationship is to a given person, place, or concept (such as Meister Eckhardt, Oberammergau, or the Nobel Prize) it is possible to understand that these things fit into this fictional character’s nonexistent biography (on a specific page, in fact, of this nonexistent autobiography). The guitarist is to play through a Talk Box the entire time: Instead of sending the sound of the guitar to an amplifier, this device sends the sound through a tube inserted into the player’s mouth. Therefor when the guitarist shapes their mouth as though to make certain vowel or consonant sounds, the guitar, now acting as a proxy for the player’s actual voice, will take on the timbral quality of these speech sounds. Each of the ten pages uses one word from Ballard’s Index, and the guitarist should learn to use the talk box to make the sound guitar ‘speak’ this word.

The title of this work comes from Sarah Krasnow’s libretto for the opera I Looked At The Eclipse. This solo flute work also factors into the structure of that opera. It was composed for flutists Margaret Lancaster and Jane Rigler in 2018. A dramatic transformation happens gradually over the course of the piece, moving from ecstatic gesturality to repetitive performative behaviors, until the very end, which is a dramatically transformed recapitulation of the beginning, with almost every note replaced with vowel and consonant sounds, whispered into the flute (the extended technique sounds are unchanged). So in fact the work itself is a form of eclipse, as conceptuality gradually overtakes gesturality.

Composed for and commissioned by baritone Thomas Buckner, Apophenia IV: A Bell In Every Finger uses poetry written by Steve Dalachinsky, about two tremendously influential artists, pianists, and composers: Muhal Richard Abrams and Cecil Taylor. Five poems come from Steve’s book about Cecil Taylor, The Mantis, while one long poem Steve wrote about Muhal Richard Abrams makes up five more sections of this piece (each sung in falsetto by Thomas Buckner). In total, the ten sections can be played in any order, making a continuous performance. The subtitle “A Bell In Every Finger” refers to Muhal’s assertion that pianist Joseph Kubera plays as though he has “a bell in every finger.” Joining Buckner and Kubera on this track are percussionist William Winant and bassist/composer James llgenfritz.

Bandcamp Daily  your guide to the world of Bandcamp

Alex Rita and Errol from Touching Bass feature in our special London edition of the Bandcamp Weekly.